After the discovery of protons, electrons, and neutrons, ventures were made to give a physical picture of an atom. Rutherford’s model of  atom supremacy by solar system suffered the following setbacks:
(i) Newtonian laws of motion can not be applied to charged particles and macroscopic.
(ii) According to Clark Maxwell when at any time a charged particle-like electron is subjected to. acceleration, it losses energy and emits radiation.
Bohr argued therefore that if an electron moves in a circular orbit it should be subjected to acceleration due to the continuous changes in its direction of motion. The electrons, therefore, continuously lose energy and emit radiation. As a result, of this, the electron should be moving in a spiral path with direction and ultimately collide with the nucleus. In other words, the atom should collapse. However, this does not happen.
(iii) it fails to explain the atomic spectra of elements.
Neils Bohr a Danish Physicist (1913) put forward a new model of atoms combining the ideas of J. J. Thomson, Rutherford and Planks’s quantum theory. He was awarded the Nobel prize for his distinguished work modal of atom in 1922.

1. The electron revolves in circular orbits around the nucleus only in certain allowed energy states called stationary states or energy levels (as the earth revolves around the sun)

2. The electron did not radiate energy regularly during the motion and therefore it did not slow down. Thus, the motion of the electron is restricted in such a manner that angular momentum (mv) is

where ‘m’ is the mass of the electron, ‘v’ is its tangential velocity, ‘r’ is the radius, ‘h’ the Plank’s constant, and ‘n’ is an integer having values 1,2,3…… for the first, second, third, etc of Bohr’s orbits.
3. When an electron jumps from one stationary state to another stationary i.e. during electronics transition the energy is being absorbed or emitted. The energy changes occur in a fixed amount called energy pocket or quanta.

According to Bohr’s atomic model when an electron revolves in a circular orbit, the 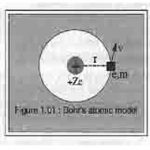 electrostatic force of attraction between electron and nucleus is balanced by Centrifugal force which results in the throw of the electron occurring out of the orbit. It is the mass of the electron moving with velocity in a circular orbit of radius as shown in figure 1.01. 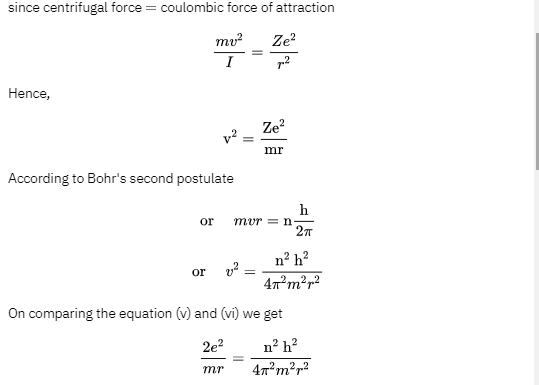 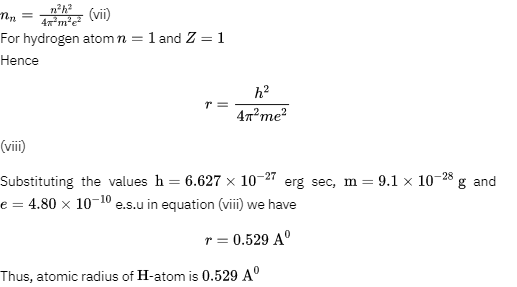 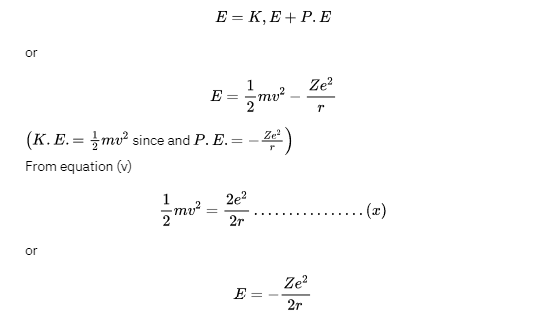 Now putting the value of r from equation (vii) we get

In the above equation for a particular atom all the quantities except n’ are constant. Therefore,

Since there is a negative sign, the value of ‘E’ increases as ‘n’ increases.
Explanation of Hydrogen spectrum on the basis of Bohr’s theory If electron. |jumps from one energy level to another then, 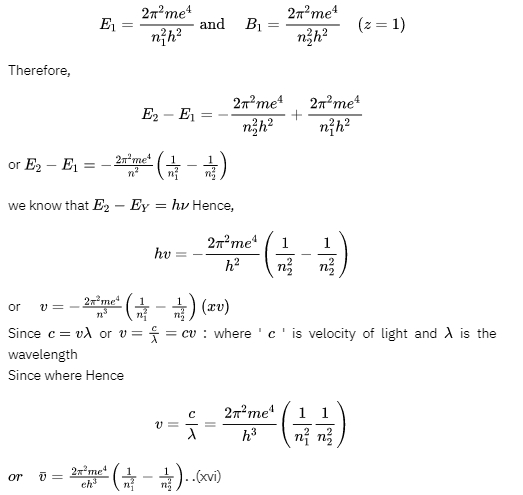 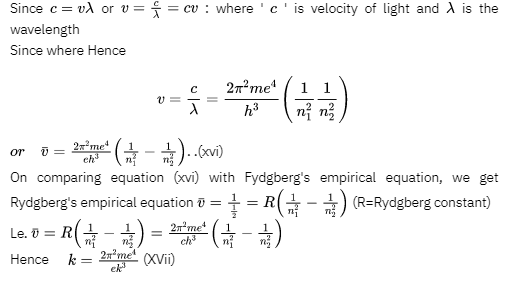 and its value comes out to be 109740 cm(-1) which shows an excellent agreement with the Rydg-berg constant found empirically by Balmer. This agreement offers excellent proof of the correctness of Bohr’s theory.
If the electron in the hydrogen atom occupies the lowest orbit, the atom is said to be in the ground state. But when the electron is excited by the absorption of energy supplied from the external sources, jumps to higher energy levels. After excitation, the electron returns to the lower energy levels, releasing excess energy in discrete amounts. As a result, different spectral lines are observed. All the spectral lines with the region in which they appear are given in the table shown below.
Table 1.1: Electronic transitions and values of n1 and n2  for various spectral lines of the hydrogen spectrum. 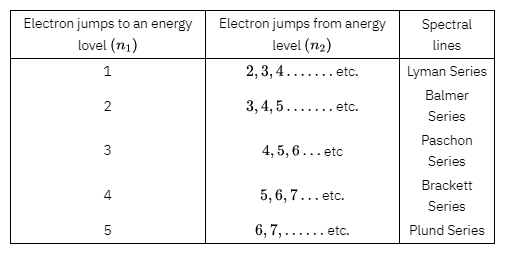 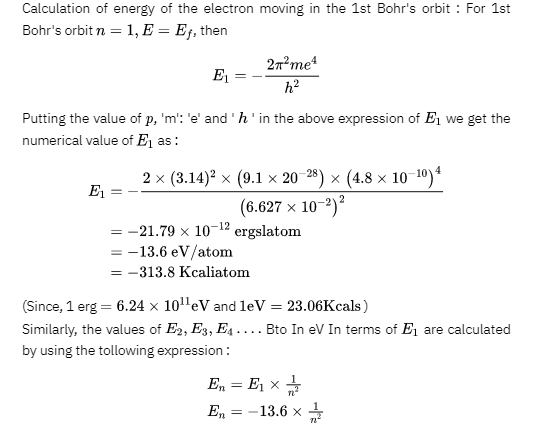 1- According to Bohr, the radiation results when an electron jumps from one energy level to another but how this radiation occurs is not discussed in Bohr’s theory,
2- Bohr’s theory only explained the spectra of H-atom and H-like particles such as He’,

etc. but failed the explain the spectra of other atoms having a larger number of electrons.
3- The pictorial concept of electrons jumping from one orbit to another is not justified because of the uncertainty of their position and velocities.
4- This theory has no explanation for the splitting of spectral lines in an electric field (Stark effect and magnetic effect (Zeeman effect).
5- The magnitude of energies of the stationary states in any atom containing more than one electron can not be accurately calculated by the application of Bohr’s Theory.
6- It does not explain the dual nature of electrons.
Example 1: What will be the energy of the electron in a hydrogen atom when the atom is excited and its electron revolves in the 4th orbit.
Solution According to the equation. 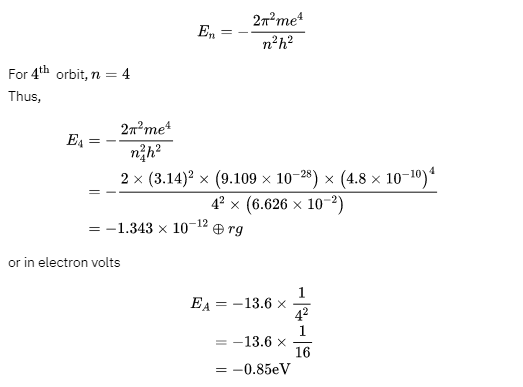 Example 2: Calculate the radius of the second orbit of the hydrogen atom.
Solution: According to the equation.