In 1924 a French scientist de Broglie pointed out that similar to light, the electron may also behaves both as wave as well as particle i.e. it possesses a dual behaviour. This improvement involving wave character of electron is introduced on the basis of a new branch of science known as quantum mechanics or wave mechanics. Hence, the fundamental idea of wave mechanics is the wave nature of matter.
Thus, according to wave mechanical concept of matter small particles like electrons, protons or other light particles when in motion possess wave characteristics tike wave frequency, wave length and wave amplitude beside the particle characteristics of mass and momentum.
de-Broglie equation :

de Broglie derived and expression tor calculating the wavelength, ‘T'(Lamda) of the wave associated with the electron and stated that the momentum (mvr) of a particle in motion is inversely proportional to its wavelength.

Where ‘h‘ is Plank constant
Proof of de Broglie’s Equation : According to de-Broglie’s concept it electron behaves as a wave its energy is given as

……..   (Plank’s equation)
Where E is the energy, y is frequency of the wave and ‘h’ is Plank constant But if the electron is considered to have the particle characteristics, its energy is expressed as:

……..  (Einstain’s equation)
Where ‘c’ is the velocity of light and ‘m’ is the mass of electron
Equating that the equation (i) and (ii) we have 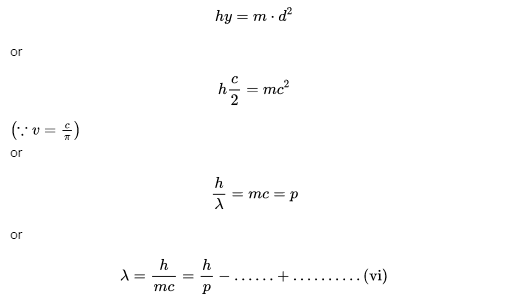 Since photons travel in free space with velocity of light c, its momentum (p) may be written as ;

This equation is called de-Broglie’s equation and the wavelength

is called de Broglie’s wavelength. From this equation, it is evident that the momentum (p) of the moving electron is inversely proportional to the wavelength,

Bohr’s theory can be modified by de-Broglie in a more natural way by considering the wave like properties of the electron in an atom. According to de-Broglie the electron is not a solid particle revolving round the nucleus in a circular stationary orbit, but it is a standing wave around the nucleus in a circular path. as shown in figure 1.03 .
For the wave to remain continually in a phase, the circumference of the orbit should be an integral multiple of wave length

f(x) (Bohr’s equation).
This equation which is based on the wave nature of electron shows that
(1) The electron can move only in those orbits for which the angular momentum must be an integral multiple of

. It means, the angular momentum is quantize.

(2) If circumference is bigger or smaller than the value as given by equation (ix), the wave is not in phase as shown in the above given figure . Thus, de-Broglie hypothesis relation provides a theoretic basis on the Bohr’s second postulate.
Spread The Love