On the basis of magnetic measurements Hund postulated an important empirical rule popularly known after his name as Hund’s Rule. This rule has a spectroscopic basis and is applied when orbitals of sub-group of an atom are incompletely occupied. This rule may be defined as :

Electrons preters to occupy separate orbital so that they have parallel spins:

or’ When electrons are added in a set of orbitals in a given sub shell (p- d- or f-) never pair up until all the available orbitals do not have one electron each.
(As students in a class room prefer to occupy single separate seat until all the chair do not fill). Thus, it is the natural law.

Both the above statements have the same meaning that pairing of electrons will occur in a set of orbitals of equivalent energies only when all the available orbitals do not contain one electron each. The atoms, ions or molecules obeying the above statements are known to be thermodynamically more stable.

To explain Hund’s rule, let us consider there are three electrons are allowed to enter in p-orbitals, their distribution will be: 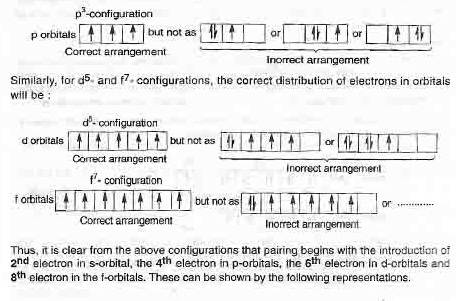 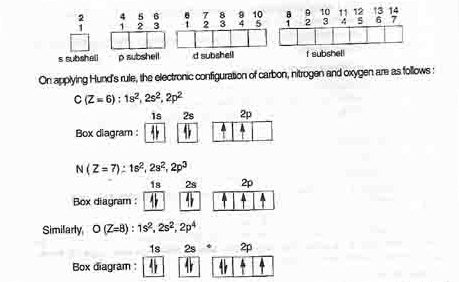 orbitals will have more stability as compared to other arrangements. Because such arrangements provide symmetry. In other words, empty, completely half filled and completely full filled orbital provide extra stability to an atom or other species.

(i) The Hund’s rule plays an important role in interpreting the diamagnetic and paramagnetic properties of various ions, molecules and complex compounds. For example: Cupprus ion

consisting of no unpaired electron, is diamagnetic whereas cupprus ion

is paramagnetic due to presence of one unpaired d-electron as clear from the following electronic configurations:

(ii) This rule satisfactorily explains how an atom exhibits more than one electro-valency for metals and co-valency for non-metals. For example :

(iii) This rule explains the relative stability of the Oxyacids of transition metals.
(iv) Hund’s rule also explains the possible number of states or level of various species.