Pauli (1925) put forward a very important principle which controls the assignment of the values of four quantum numbers a an electron in any atom. it applies certain restrictions on their values for electrons hence the name “Exclusion principle“. This principle it will be stated as :
‘No two Electrons(e) have all the four (4) quantum values identical’
(As no two individuals of our society can have the same name, father’s name, Vill or Moh. and Post office)
Or ‘No two electrons(e) of an atom can exists in the same quantum state’.
The statements given above are identical and carry the same meaning that it two electrons of an atom have the same values of principle quantum number ‘n‘ azimuthal quantum number ‘l’ and magnetic quantum number, ‘m‘, they must have different values of spin quantum number. ‘s‘. Thus, every electron in any atom differs from each other in total energy.
Thus, according to Pauli’s principle the electrons entering the same orbital should have opposite spins as shown below:

Because the state of opposite spins

.
From the above discussion, it is concluded that an orbital never contains electrons of same spin. 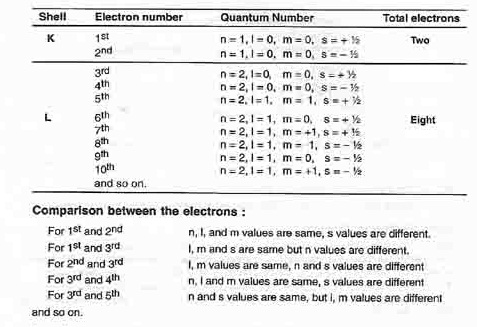 (i) This principle is very much useful in determining the maximum number of electrons In each principal level or sub energy level by the following equation :
Total number’s of electron(e) in the main energy level :

Where n = principal quantum number and
l = Azimuthal quantum number(AQN). Thus, putting ‘n‘ and ‘l‘ values in above formula. we can calculate the total number of electrons possible in arty shell.
For example : For K shell

Thus, the total number of electrons in each shell are equal to

.
(ii) The other remarkable importance of this principal is to decide the preferred arrangements of electrons in an orbital.
(iii) Why are orbital does not contain more than two electrons ? can reasonably explain by using Pauli’s exclusion principle.
Spread The Love