Aufbau is a German expression meaning ‘build up‘ or construction. This principle deals the filling of electrons in different energy levels. This is also known as ‘building up principle‘ or  ‘construction of an atom‘. According to this principle, protons are added to the nucleus and the electrons are added to orbitals one by one starting from the lowest available orbitals and this addition is continued till all the electrons equal in number to the nuclear charge (atomic number) are safely accommodated.

In other words, orbitals are filled in order of their increasing energies. The configuration thus obtained corresponds to the stable state of the atom. Which is a given major energy level orbital it is found that the energy of these orbitals increases in increasing order  and the order is

. For the higher energy levels, these differences are sufficiently pronounced that staggering of orbitals may result and the energy of the given orbital depends on the nuclear charge and different type of orbitals are affected to different degrees. 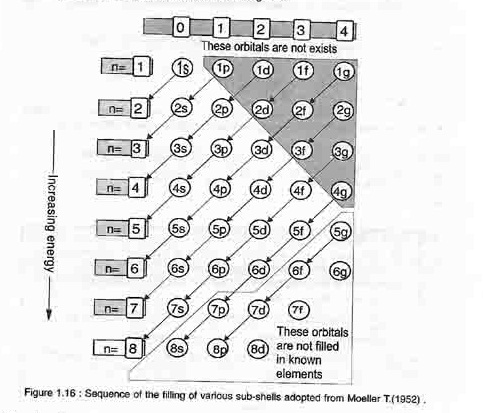 Thus, there is no single ordering of energies of orbitals correct for all elements. Nevertheless, the order is :

which is found to be extremely useful.
This complete order is not only correct for a single element, it is remarkably accurate for all elements. For the sake of simplicity, Moeller In 1952 suggested a “mnemonic diagram’ (figure 1.16) that gives the same order of energy levels.

Madelung suggested that the above precise order which is followed in the filling up of the orbital is based on the principle quantum number ‘n‘ and the azimuthal quantum number ‘l‘. Using n and l values he was able to derive the same sequence of energy levels by applying following rules :

1. The orbitals for which the value of (n + l) is lowest, is fined first by the electrons. Thus, the order of energies af the orbitals will obtained by increasing (n + l) values.
For example:

and so on.
2. When two or more orbitals have the same value of , the one with the lower value of ‘n’ is filled first by the electrons. Thus, the order of increasing energies of such orbitals wild be:

3.   In the sixth period, 4f and 5 d sub-shells have approximately close in energy. At    lanthanum (Z = 57), the last electron does not go to the 4f sub-shell as predicted in aufbau principle but is added to 5d sub-shell to give it a configuration :

. However, the next electron for cerium (Z = 58 ) is added to 4f sub-shell and the electron of 5d goes to 4f to give it a configuration: