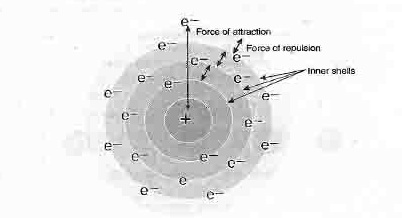 This reduction in attractive force on valence electron is called ‘screening effect’ or ‘shielding effect’. This screening effect becomes greater and greater as the number of inner shell electrons increases. With the decrease in the force of attraction caused by the screening effect of inner electrons, the actual nuclear charge (Z) also decreases by the quantity “o’ (or S ), which is called ‘screening constant’ (σ) or: ‘Slater constant’ (S) and the decreased nuclear charge which is denoted by ‘ Z off’ or Z∗ is called effective nuclear charge.
1.e. Z eff =(Z−σ)=(Z−S)
Z = nuclear charge (atomic no,) and S = Slater’s constant
Thus, effective nuclear charge may be defined as ” the actual nuclear charge (Z) minus the screening constant (σ) produced by the electrons residing between the nucleus and the outer most shell electron (valency electrons)’,
Slater’s rule for calculating Screening constant : In order to calculate the extent of shielding in 1930 Slater proposed the following empirical rules.
(i) To calculate o-value, write out the electronic configuration of the element in the following order and groupings.
(1s); (2s,2p);.. (3s,3p); (3d);… (4s,4p); (4d);.. (4f); (5s,5p),….
(ii) Electrons in any group to the right of the ( ns,np) group contribute nothing to the shielding constant.
(iii) All of the electrons in the ( ns,np) group, shield the valency electron to an extent of 0.35 each, and for the 1s orbital a value of 0.30 seems to work better.
(iv) All electrons in the (n−1) shell shield to an extent(max length) of 0.85 each.
(V) All electrons in the (n-2) or lower shells shield completely, and their contribution is 1.00 each.
When the electron being shield is in an nd or nf group, rule (ii) and (iti) are the same but rules (iv) and (v) are replaced by the rule that the contribution per electron from all electrons in the inner shell is 1.00.
(vi) All electrons in groups lying to the left of the ‘nd’ or ‘nf’ group contribute 1.00.
Thus, for an electron residing in ns or np orbital =
0.35 [Number of the remaining electrons in nth shell] +0.85 [Number of electrons in (n−1) shell] + 1.00×[No. of electrons in the inner shells] 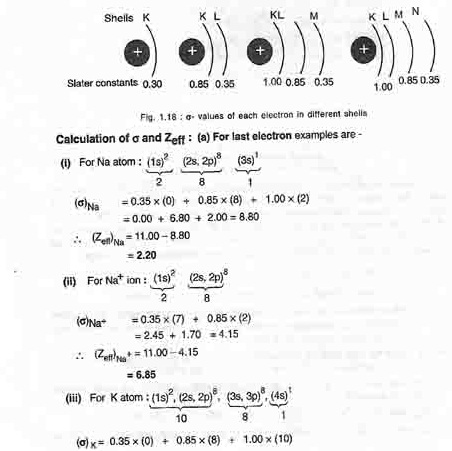 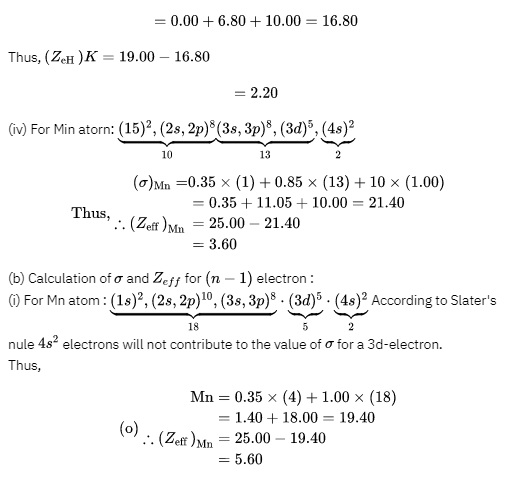 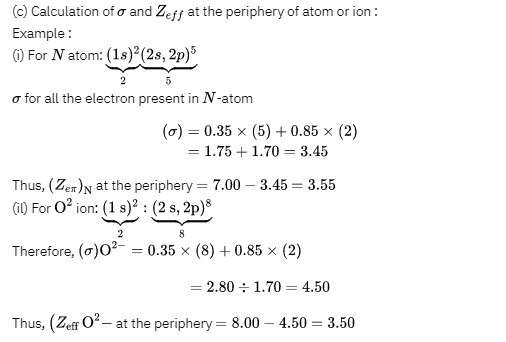 (i) Both s and p orbitals are grouped together for calculating the effective nuclear charge whereas the radial probability distribution curves tor a given a indicate a higher penetration or shielding affect of s as compared to p – orbital.

(ii) Penetration by higher occupied orbitals( than the one consider) Into inner orbitals is well known but even then their contribution is ignored as per Slater’s rule.

(iii) All electrons irrespective of s,ρ,d, or l orbitals at positions lower than the ( n−1) shall shield the n shell electron with equal contribution of 1.00. This is unjustified because all orbital are not same so, different orbitals cannot have the same contribution on energy consideration.