Thus, electronegativity is defined as the tendency (or ability) of an atom to attract a shared pair of electrons towards itself in a molecule’, In general.

The electronegativity of an atom ‘ A ‘ is generally represented as XA where ‘ A ‘ is an atom. Since it is the tendency of an atom hence it has no unit of measurement.

The scale of Electronegativity (EN):

The EN scales have been given with the help of various types of experimental data. which are completely different. 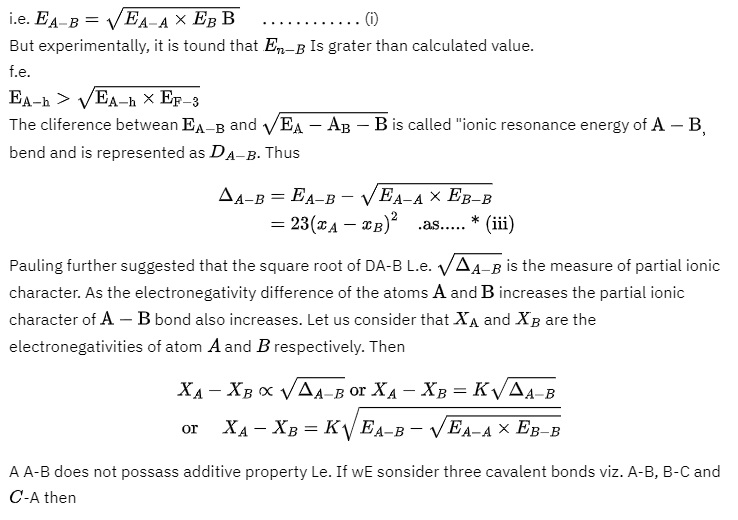 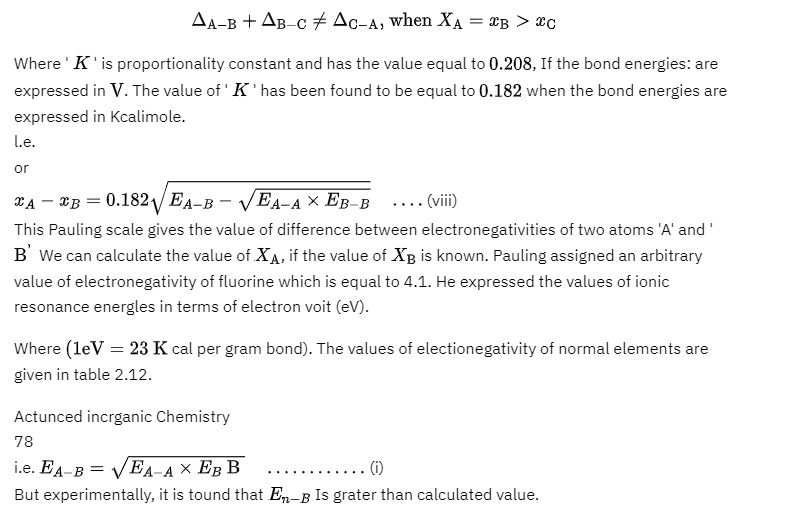 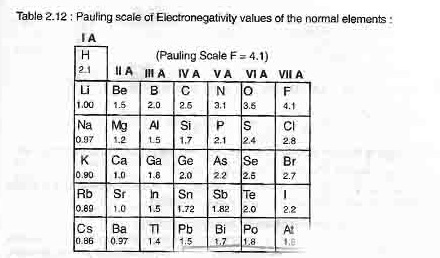 In 1934 Mulliken suggested an alternate approach to electronegativity. According to him, electronegativity is the mean of the difference between ionization energy and electron affinity of an atom. Let us consider two atoms ‘A’ and ‘B’ forming a molecule A−B, in which an electron is transferred from A to B resulting in the formation of A+cation and B−anion.
If IA is the ionization energy of atom A and (EA )B is the electron affinity of atom B then, the change in energy is equal to IA−(EA)B-Alternatively, if the electron is transferred from B to A then IB−(EA)A is the change in energy. Depending upon the ease of formation of these ions, either

When the value of ‘ I ‘ and ‘EA’ are expressed in eV. It is found that the value of electronegativity of an atom measured by Mulliken is 2.8 times larger than the Pauling values hence he modified his scale as;

If these values are measured in Kcal per mole then the above relation is expressed as:

The conditions for the formation of purely covalent or ionic bonds on the basis of Mulliken’s scale are :
(a) For a pure covalent bond i.e.

The disadvantage of Mulliken’s Scale:

There are two main practical disadvantages of this scale:
(i) The value of electron affinities is not easily available
(ii) The value of IE and EA with reference to the transfer of electrons between the atomic orbitals is not always known due to the lack of their constitution.

Allred and Rochow’s scale is based on the electrostatic force between the nucleus and the valence electron. Thus, according to Allred and Rochow’s approach to the electrostatic force of attraction, FES (in dynes) between an atom ‘A‘ and a bonding electron separated Irom its nucleus by its covalent radius {(rA)cov } in A, is the measure of electronegativity of the atom ‘A‘. Hence, according to Coulomb’s law –

Li<Be<B<C<N<O<F<Ne
Similarly, in the third period, I.E. values of the elements of the third period should increase in the following order:
Na < Be < B < C < N < O < F < Ne
However, because of the different factors which influence the values of IE, the actual order of IE in the 2nd and 3rd periods are:

Factors affecting the magnitude of electronegativity :

An atom while acquiring a positive charge, (either partial or integral), would tend to attract electrons more strongly than its parent atom. Thus, the greater the positive oxidation state of an atom greater would be its electronegativity. For example: In the oxides, NO2NO2 and N2O5 the oxidation state of nitrogen atoms is +2,+4, and +5 respectively. Hence, the nitrogen atom in N2O5 will be more electronegative: 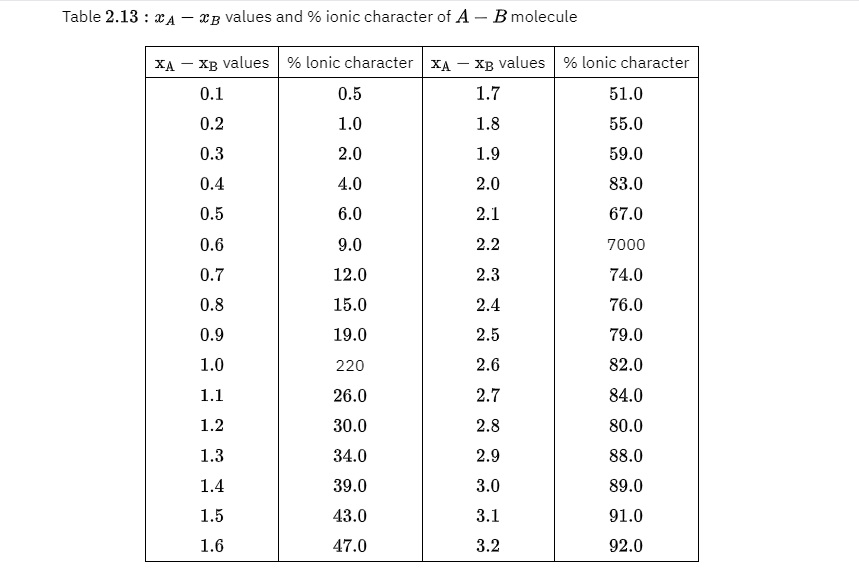 The elements diagonally placed in the 2nd and 3rd period of the periodic table show many similar properties which is due to the almost the same electronegativity of the elements.

(vi) Metallic character of the elements:

The nature of the XOH molecule can be predicted on the basis of electronegativities of the atom X as below:
(a) If xO−xH>xX, the O-H bond will be more polar than the O-X bond hence ionization of XO−and H+ions will be obtained and the molecule will be acidic in nature.
(b) If xO−x4<xO−xX, the O−H bond will be less polar than the O−X bond hence ionization of X+ and OH ions will be obtained and the molecule will be basic in nature.
Points to remember :

Also, whenever a cation has formed the ratio of the nuclear charge to the number of electrons (z/e ratio) is increased which results from the effective nuclear charge is also increased and the electrons are pulled strongly towards the nucleus. Consequently, the cation becomes smaller:

2. An anion always targets its corresponding atom: because when an anion is formed by the addition of one or more electrons, the effective nuclear charge decreases, and the electron cloud expands which results from the anionic size increasing.

decreases in the following order :

10. Platinum is the most precious metal commonly known as “white gold”.