There are two forces that are operating on ionic crystals.
(a) The electrostatic force of attraction between cations and anions. and
(b) Inter atomic repulsive forces acting between nuclei of these two ions. The variation of potential energy (P.E.) of oppositely charged ions varies with their internuclear distance of separation (r0) as shown in figure 3.01. 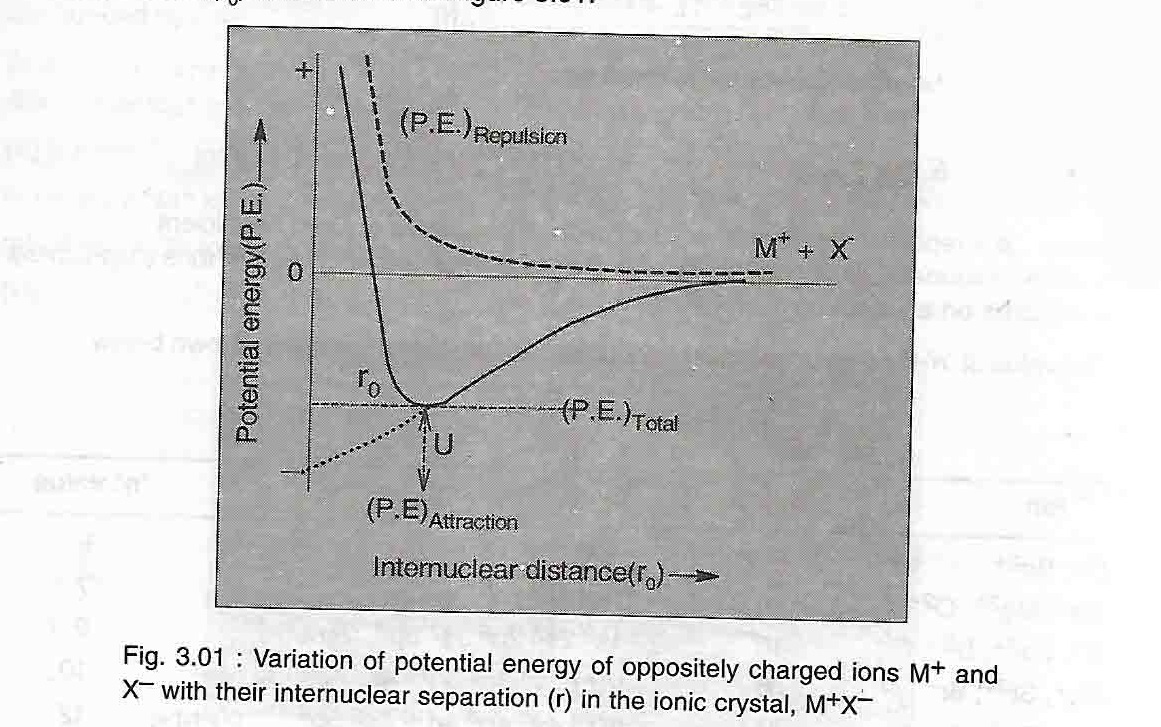 where r0is the equilibrium distance between two ions when P.E. has a minimum value. If we assume that an infinite distance separates the ions then the value of P.E. is zero and this value is equal to the lattice energy (U) of an ionic crystal. Thus, the lattice energy of an ionic crystal M+X−is defined as “the energy released when a certain number of cations and anions are brought together from an infinite distance to form one gram mole of the ionic crystal or solid.”.

It is also defined as “the energy required to remove ions of one gram mole of a solid ionic crystal from their equilibrium position in a crystal to infinite distance”.

Here the value of U is the same but has the opposite sign.

where b= repulsion coefficient or proportionality constant or Born coefficient.
n= Born exponent, Z+ and Z−are the number of charges on Mn+ and Xn− ions respectively. e= charge on an electron (4.8×10−10 e.s.u. )
The value of ‘ n ‘ for a given ion depends on its configuration for ions as shown below:

Equation (iii) is known as the Bom equation. It will be seen that the repulsive force

, increases more rapidly than the attractive force in equation (iii) with a decrease in the distance r.
Equation (iii) is mainly used to calculate the energy released if a cation and anion which are separated by an infinite distance in a gaseous state are brought together in a crystal at a distance ‘ r ‘ from each other.
Application of Bom equation :
Let us consider the application of the Born equation to a NaCl crystal. In NaCl crystal, there is not one Na+ and one Cl- but a large number of these ions arranged together according to a certain specific geometry. Therefore, it is necessary to consider (P.E.) attraction and (P.E.)repulsion between all of them. Since, in the crystal lattice of NaCl, each Na+ is surrounded by

Therefore, the potential energy due to the first term in the Bom equation is obtained by adding up the effect of all the interactions as follows :

For NaCl crystal Z+=Z¯=1. The quantity in the bracket which is the sum of infinite series is called the Madelung constant. For NaCl structure, its value is 1.747558. If this constant value is represented by ‘A then the equation (iv) is expressed as : 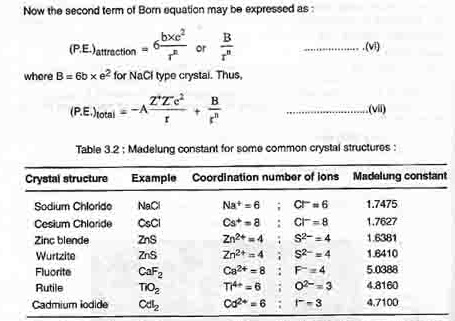 When attractive and repulsive forces are equally balanced at a state of the stable equilibrium position, the term ‘B’ may be eliminated. At this stage, the potential energy of the Ion is minimum and 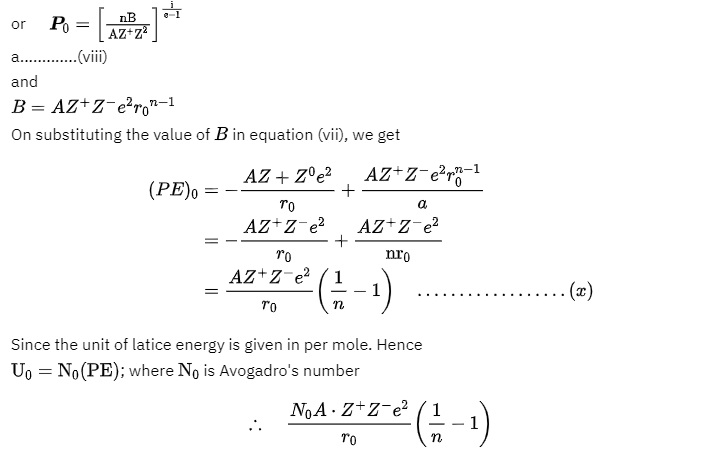 This equation is called the Bom-Lande equation.
Since n is always greater than unity henceU0has the value in a negative sign.
Conclusions are drawn from the Born-Lande equation :
From equation (xi) we may derive the following conclusions :
(i) The higher the charge on cation and anion, the greater would be the value of lattice energy (U0). In other words, greater would be the stability of the crystal. Example :

1- Lattice energy may help to explain the solubility of ionic salts in suitable solvents. When ionic compounds dissolve in the solvent, solvation of their ions takes place, If water is the solvent, the process is called hydration of the Ions. This ionic solvation is an exothermic process releasing a considerable amount of energy, which is utilized to rupture crystal lattice. The liquids which cause more ease of solvation of ions are good solvents for ionic solids and have a high dielectric constant. The less solubility of Li, Be, Mg, Ca, etc with polyvalent anions such as,

etc. in water is due to their high values of lattice energy. Thus, we can say, the greater the value of lattice energy of ionic crystals, the less would be their solubility in water. It is because when these compounds are dissolved in water less amount of energy is released which is insufficient to break their crystal lattice.
2- Lattice energy is involved in the calculation of electron affinities, the heat of formation, proton affinities, etc.
3- It helps to explain the stabilities of the compounds like hydrides, oxides, carbonates, etc.
4- It involves the derivation of crystal field stabilization energies of transition metal complexes.
Pages:
Spread The Love