Chapter 2:- Periodic properties of the elements

(i) In homonuclear diatomic molecules:

Let us consider a homonuclear diatomic molecule Y2 formed by a single covalent bond between two atoms Y and Y. It is in this molecule that the two. like atoms are considered to be two-sphere in close contact with each other, then according to the definition of covalent radius, the distance between these two nuclei is denoted by dy−y which is equal to the sum of the radii of the two atoms. 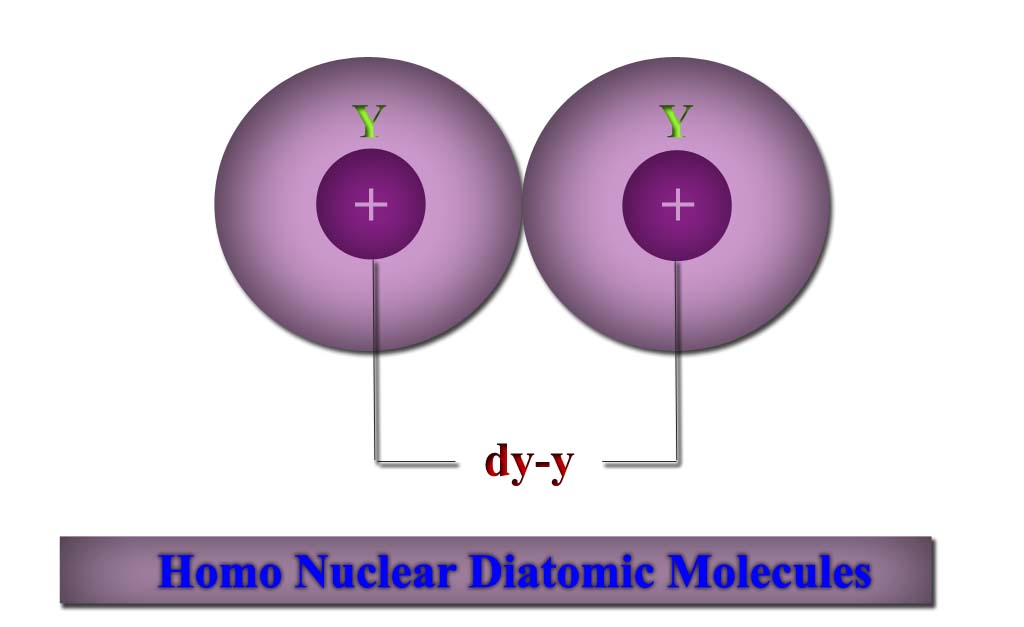 In the case of two dissimilar atoms joint together by a single covalent bond like A- Y. The bond length between A and Y is dA-Y which is equal to the sum of the radii of A and Y When the electronegativity of these two atoms is nearly equal.

But when the electronegativity values of these two atoms ‘A ‘ and ‘ Y‘ are not equal, then the experimental value of bond length, dA−Y between these two dissimilar atoms is always less than the sum of the radius value of both atoms.
dA-Y < rA+rY

This deviation is arisen due to the following:

dA-Y = rA – rY – 0.09(xA – xY)
where dA−Y is the internuclear distance between A and Y-atoms, rA and rY are covalent radii, xA and xY are electronegativities of atom A and Y respectively, and −0.09, correction term. Later on, Pauling generalized the Schomaker and Stevenson equation as :
dA-Y = rA + rY – C(xA – xY) (Faulling Equation)…(iii)
where ‘C‘ is Schomaker and Stevenson coefficient which depends upon the atom involved In the molecule. The value of ‘ C ‘ is 0.08,0.06,0.04 and Å0.02ÅA for the p-block elements of the 2nd, 3rd, 4th, and 5th periods respectively. When we compare these two equations to calculate, dA−Y for the A-Y molecule. Pauling equation is found to be more reliable than that of the Sckormaker and Stevenson equation, because of the fact that the dA – Y calculated by the Pauling equation is approximately equal to the dA – Y observed.

The covalent radii are three types:

(b) Metallic radii or Crystal radii:

In a metallic crystal, metal atoms are arranged in. closely packed spheres at the minimum distance possible between them. It is defined as ‘one hall of the distance between the nuclei of two adjacent metal atoms closely packet in the crystal lattice and the metal atom must exhibit the coordination number of 12′, eg. In the crystal of sodium metal, the distance between the nuclei of two adjacent atoms is equal to 3.80 A hence the metallic radius of a sodium atom is 3.8/2 i.e, 1.9 A. The metallic radii are 10 to 15% higher than the single bond covalent radii. (ref. Table of the metallic radius of s and p-block elements), and single bond covalent radi are smaller than van der Waals radius. This is due to the stronger binding forces in the metallic crystal as compared to van der Waal’s force. Also in a metallic crystal, the bond between metal atoms is not localized. whereas in the case of a covalent crystal, it is localized.
Table 2.2: Metallic radii of elements having a coordination number of 12inA

Most of the nonmetals are held together by a covalent bond in a molecule and each molecule in a solid state is held together by van der Waals forces. It is defined as ‘one-half of the internuclear distance between two adjacent atoms of two neighboring molecules of an element in the solid-state held together by van der Waal forces. These forces arise due to the mutual distortion of the electron cloud of one molecule with the other molecule and vice-versa. The van der Waal forces are absent in gaseous molecules because gaseous molecules are mobile and found farther away from one another. They are present when the atoms or molecular substance are considered in liquids and also in crystalline state at Jow temperatures. Thus, the van der Waal force is related to the effective packing size of the atom in the solid stale. It is determined by the X-ray studies of various elements in the solid state.
For example, in the Cl2 molecule, the distance between two nuclei of two adjacent chlorine of neighboring molecules is 3.60A and the distance between the nuclei of two bonded Cl–atoms is 1.98A. where a and b are internuclear distances between two atoms.
$$ Hence\:covalent\:radius\:=\:\frac{a}{2}=\frac{1.98}{2}=0.99\:A^{\circ } $$
$$ And,\:Van\:der\:waal\:radius\:=\:\frac{b}{2}=\frac{3.60}{2}=1.8\:A^{\circ } $$ 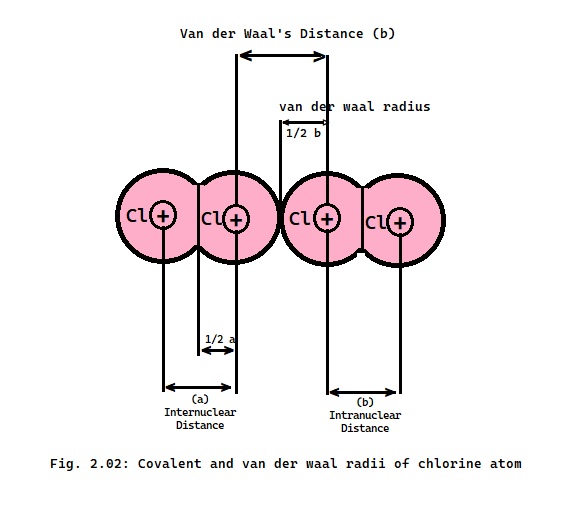