Lowis-Langmuir Concept (1916−19): Lewis proposed that an atom attain inert gas configuration (1s2 or ns2np6) by sharing one or more electron pairs by the combination of similar or dissimilar atoms. Langmuir called these shared electron pairs between two or more atoms as ‘Lewis electron-pair bond’ or ‘covalent bond’ or sometimes as ‘non-polar’ bond because it does not acquire polarity. Thus, the concept of a covalent bond is also known as the Lewis-Langmuir concept and the compounds formed by the sharing of electrons of their atoms are called ‘Covalent compounds‘.
According to Lewis’s concept, the number of electrons that an atom contributes for sharing in a covalent bond is called ‘covalency’. Thus, the covalency of H, O, and N In H2, O2, and N2 are 1,2 and 3 as they contribute 1,2 and 3 electrons respectively in sharing. Similarly, the covalency of C, P, and S in CH4, PCl5, and SF6 are 4.5, and 6, since they share 4,5, and 6 electrons with louring H, five Cl, and six F – atoms respectively.

A covalent bond is formed by equal sharing of electrons between two like atoms or atoms having nearly equal electronegativity value and has no ionic character, such a covalent bond is known as a true covalent bond’ or apolar bond. Such covalent molecule is called ‘nonpolar‘ or ‘apolar’ molecule, examples are ,H2,Cl2,Br2,O2, N2 etc. But in the case of covalent molecules formed between two dissimilar atoms having different electronegativity, the magnitude of sharing electrons is not equal in both atoms. One of them has a strong attractive force for shared electron pairs due to which it develops a partial negative charge (−δ) on it.
As the result of the development of a partial negative charge, an equal partial positive charge (+δ) will develop on the other atom. It is noticed that these fractional charges developed on both atoms should not be considered unit charges. Molecules having partial charges are called ‘polar molecules’ such as HF. HCl, NH3, H2O, etc, and bond is called a polar covalent bond. It is interesting to know that all the non-polar covalent molecules show approximately 2% ionic character. This arises due to small contributions of the ionic resonance structure of the H2 molecule. Similarly, the extreme case of ionic compounds like LiCl, NaCl, and CsCl has a small contribution to-wards covalent character.

During the formation of covalent bonds, the atoms acquire an inert gas configuration (1s2 or ns2, np6 ). It is known as the octet rule. For example,

etc. obey octet rules, In these molecules, the central atom, as well as bonded atoms both acquire pure inert gas configuration, and Le. 8 electrons, are present in their valence shell.
Deviation from octet rule:
There are certain covalent molecules that do not follow the octet rule. They have either less than 8 electrons (incomplete octet) like 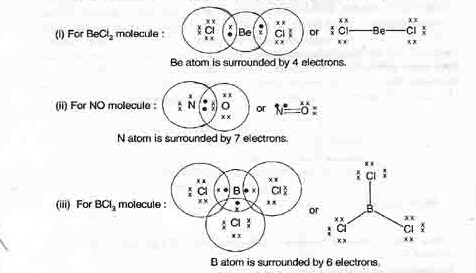 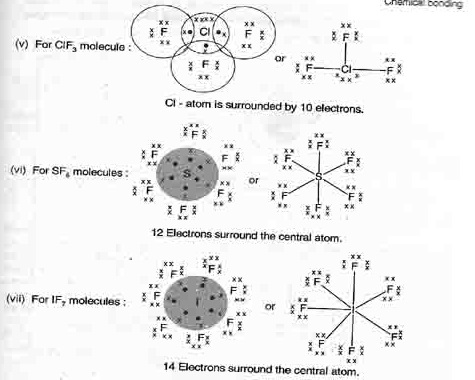 Reason for the failure of the octet rule :

The following concepts are helpful to explain the failure of the octet rule.

According to Sidgwick, it is not essential for an element to have 8 electrons in its valence shell for their stability as described earlier. The covalency of an element may be expanded from the octet rule and depends on the period in which the element resides. The maximum covalency for the elements of the first period (n=1) is two, for the second period (n=2) it is 4, for 3 rd and 4th period (n=3 and 4) it is 6, and for the rest of the period (n>4) it is 8. Consequently, the maximum number of electrons shared for these elements is 1×2=2;2×4=8;2×6=12, and2×8=16 respectively. 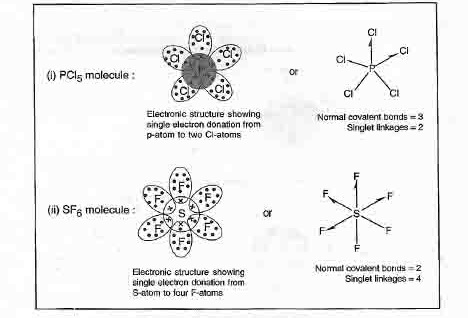 Since none of these atoms contain d-orbitals in their outermost shell. It is, therefore, in these atoms no excitation occurs and these atoms do not have other covalencies. On the other hand, the elements which contain empty d-orbitals in their valence shell (outermost shell) show variable covalencies. For example, the Sulphur atom has two unpaired p-electrons in its ground state hence its covalency is 2. whereas it has four and six unpaired electrons in its first and second excitations hence, its covalencies in excited states are 2 and 4 respectively. It is clear from the following electronic configurations:

When sulfur combines with highly electronegative F-atoms, the energy is released during the process of combination which is sufficient to promote the paired 3px electrons to higher secant 3d−orbitals in first excitation and the paired 3 s-electrons to other 3d− orbitals in the second excitation, showing variable covalencies 4 and 6 respectively, Similarly, phosphorus also shows variable covalencies of 3 and 5 respectively. The variable covalencies 3,5 and 7 are observed in the case of halogens Cl, Br, and I (except fluorine). Thus, the maximum covalency shown by an element is equal to the number of unpaired electrons obtained after complete unpairing of paired s and p- electrons.
t is the point to remember that when an atom has a tendency to form covalent molecules with the more electronegative atom in all its covalencies, then the molecule in which the covalency of the central atom is maximum, would be more stable. For example: when sulfur combines with fluorine forms SF2, SF4, and SF6. In which the SF6 molecule is more stable than the remaining two fluorides. Similarly, PCl5 is more stable than PCl3.
Pages:
Spread The Love