In 1927, Werner Heisenberg proposed the uncertainty principle. According to this principle, Heisenberg’s uncertainty principle statement if an electron or any other electron like a small moving particle is exhibiting dual nature (wave and particle), it is impossible to know simultaneously the exact position and the momentum at the same time with accuracy. It means when an electron behaves as a particle, its. position can be determined more exactly, but at the same time, there would be uncertainty about Its momentum or velocity. 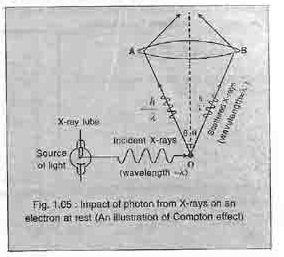 Similarly, if the velocity or momentum is determined exactly then, there would be uncertainty about its position, Thus, Δx and Δp are the uncertainties (i.e. errors) in the measurements of position and momentum respectively of a moving particle then we have the following mathematical expression :

This equation is known as the Uncertainty relation or Heisenberg’s equation which can be stated in words as the product of uncertainty in the simultaneous determination of the position and momentum of a particle is equal or greater than Plank’s constant”. Hence, the idea of definite orbits has no meaning as suggested by Niels Bohr in 1913. The best we can only predict is the probability of locating an electron with a probable velocity with the particular energy in a given region of space around the nucleus at a given time which gives the concept of the orbital.

The above mathematical expression states that when Δx is small Δp will be large and vice versa. It means the certainty of determination of one property introduces uncertainty for the determination of the other. The equation

(i) can also be expressed as follows:

Where ΔE and Δt are uncertainties in the energy of the particle and time of passage past a particular point. The equation

(ii) States: that if the time for which the system remains in a particular energy state is short, then its energy will be more defined and for a longer stay in a state, the energy will not be well defined. Thus, this principle is regarded as a fundamental principle of nature. This equation applies to complex molecules and to internal molecular energy levels as well. It is a Heisenberg uncertainty principle statement