This theory explains the quantum mechanical treatment of metallic crystals and is similar to the molecular orbital theory of covalent molecules. According to this theory, two atomic orbitals (A.O.’s) of equal energy overlap together to form two molecular orbitals (M.O.’s) one is bonding M.O. and the other is antibonding M.O.
Let us consider Li-atom whose electronic configuration is

forms Li2 molecule by the overlap of A.O.’s. The existence of Li2 is found in the vapor state. Along with these bonding and antibonding M.O.’s, there also exist three empty 2p-orbitals. These vacant 2p-orbitals are responsible for the metallic properties but the nonmetals like C, N, O, and F have no empty atomic orbitals in their excited state. When we consider a large number of Li-atoms together the number of empty A.O.’s, is more than the valence shell electron present. If the valence shell electron is utilized in the formation of a normal covalent bond then the atom fails to attain the noble gas configuration. The molecule formed behaves as an electron-deficient molecule. The utilization of these empty atomic orbitals to form additional bonds are of two types.
1- Empty A.O.’s of one metal atom may accept lone pairs of electrons from other metal atoms to form a coordinate linkage.
2- There is also the formation of a cluster type of structure where each metal atom shares its tew electrons with a large number of neighbor atoms. Such a clustering structure also occurs in boron hydrides and carboranes.

The L2 molecule is formed when two atomic orbitals(AO’s) of the same energies are combined to give two molecular orbitals (MO’s) one bonding (BMO) and one antibonding (ABMO) each with its own discrete energy. If AO has one electron, the two electrons enter in BMO as shown in the following configuration.

The molecular orbital electronic configuration of the Li2 molecule shows there is a total of 6 electrons in the molecule; 4 electrons in BMOs and 2 electrons in ABMO. Thus, the bonding occurs from the filling of s 2s level by valency electron whereas antibonding s” 25 orbitals remain empty in the vapor state as shown in Figure 3.07. in the case of lithium, the metallic structure is more pronounced in the solid-state.↑↓ σ 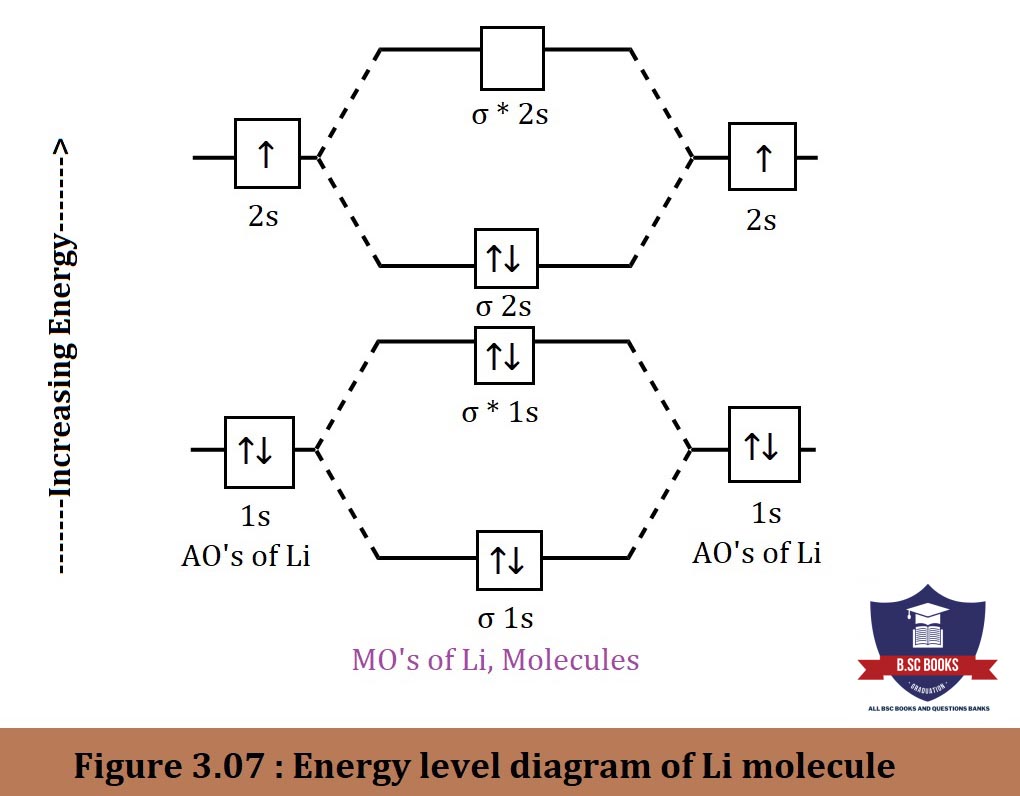 Let us suppose that the L2 molecule combines with another L-atom to form a Li3 molecule, In this case three 2s atomic orbitals of three Li-atoms would combine to form three M.O’s viz one BMO, one nonbonding (NBMO), and one ABMO. The energy of NBMO lies in between BMO and ABMO. The BMO contains 2 electrons and NBMO contains only one electron as shown in figure 3.08 (a).

In this case, four half-filled 2s atomic orbitals of four Li-atoms combine to form four MO’s viz two BMO’s and remaining two ABMO. The presence of two NBMO between the BMO and ABMO reduces the energy gap between and the orbitals in this molecule four valency electrons would occupy the two lowest MO’s which are both BMO as shown in the figure 3.08( b). Evidently, it is observed that during the form action of a cluster the number of formations of M.O’s increases with the increase of the number of electrons, and there is a decrease in the energy gap between these M.O’s.

When nAO‘s of nLi– atoms are involved in combination they form a large number of MO’s and the energy level of the orbitals are so closer to each other that they form almost a continuous level of energy band as shown in figure 3.09. Which denotes closely spaced MO’s level constituting a band of n-energy levels of n-electrons.

It is also observed that the number of AOs is equal to the number of MOs formed. Since each AO has away one electron in the valence shell of lithium but MO’s formed contain two-electron was in each. Hence, the hand obtained is only half-filled. Since MO’s formed by n metals are extended in three-dimensional structure over energy levels of all atoms in a metallic crystal so it has a high degree of mobility to account for the high conduction of metals. This occurs because the MO’s are spread all over the whole crystal and there is no gap of energy between filled and empty MO’s formed in the band In the case of lithium only half of the MO’s in the valence band are filled with electrons. In other words, the upper half of this band is considered to be empty while the lower half is filled (see figure 3.10 a) But the difference in anergies is so small that the electron can go from lower half to upper halt, Simply by the energy available even at room temperature.

On the other hand, Be-atom has two valence electrons in its 2s-level. Hence the MO’s. formed are completely filled, It’s 2s AO’s. form a band of MO’s. In addition, 2p AOs also form the 2p-band of MO’s. In this case, the upper part of MO’s of 2 s-bands overlaps with the lower part of 2p. the band as shown in figure 3.10 b. Due to this overlap, some portion of the 2p band becomes occupied and some portion of the 2s-band becomes vacant. Hence, beryllium performs a better metallic behavior as compared to lithium. 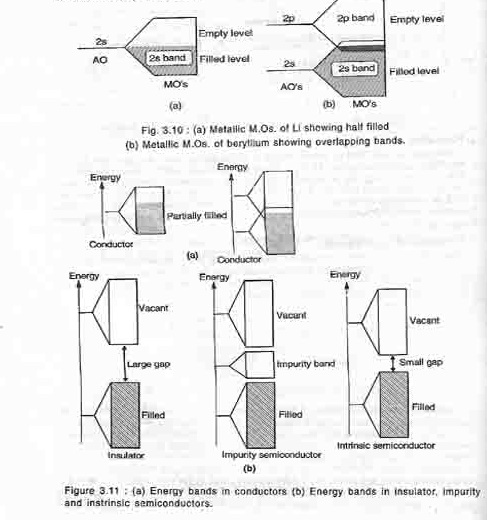 In the above figure, the completely-filed levels are called the ‘valence band’ and the half-filled or empty levels are called the ‘conduction band’. In the case of metals, the valence bands generally overlap the conduction band. i.e. there is no energy gap between these two bands. Thus, on the basis of c∗ band theory solids can be divided into the following categories :
(i) Conductor
(ii) Insulator and
(iii) Semi-conductor.

They are defined as the metals in which the energy gap between the full-filled valence band and the empty conduction band is very low and practically they overlap each other (fig. 3.11 a). The resistivities of metal lie in the range (10−>6 to 10−>8Wm) at room temperature and increase with the temperature.

In insulators, the valence band is full-filled so perturbation is not possible within the band. Also, there is a wide energy gap between valence and the empty band. Hence, there is no flow of electrons occurs between these two bands (fig. 3.11 b). The resistivities of insulators lie between 108 to 1020Wm at room temperature.

It is produced when gallium (Ga) is added to germanium. When a p-type semiconductor is brought into contact with an n-type semiconductor, a double layer of charge is set up at the Junction. The reason for the double layer of charge is the presence of an excess of electrons on the n-side and an excess of holes on the p-side of the Junction which causes holes on the p-sit to have a tendency to diffuse n-side (n-denotes negative and p-denotes positive) 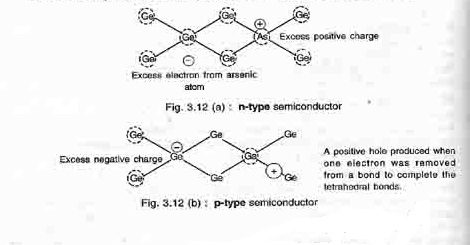