The word quantum is used to signify that all the energy levels which are available to an electron are governed by the law of quantum mechanics. The number used to identify various states which are available to an electron are termed as ‘quantum numbers‘. They specify the location and energy of an electron in an atom; Just as to locate ‘any person we are required to have information about the town, Mohalia, house number, and name of the person. In the same way, each electron in a particular atom is characterized completely by four quantum numbers, the principal, azimuthal, magnetic, and spin quantum numbers which are described below –

Where m = mass of the electron, v =  velocity, r = radius, and h = Planks constant.
$$ The\:lowest\:energy\:\left(E_n=\frac{2\pi me^4}{n^2h^2}\right) $$
corresponds to the minimum value of n( n=1 ) and the energy increases (becomes less negative) with increasing ‘ n ‘ values until the continuous is reached n=∞. In other words, as the value of ‘ r ‘ increases, the electrons get farther away from the nucleus, and its energy increases. Similarly, as the value of ‘  ‘ increases radius of the shell also increases. This will be clear from the following equation
The maximum number of electrons accommodated in each main shell is equal to 2n2. Therefore K, L, M, and N shells accommodate 2, 8, 18, and 32 electrons respectively. An electron having a principal quantum number is said to be in the K-shell; which will on average be closer to the nucleus than an electron having n=2 belonging to L- the shell.

(b) Azimuthal or Subsidiary Quantum Number :

This quantum number is established by Sommerfeld in his atomic model to explain the finer splitting of spectral lines during the elliptical motion of different flatness in the case of hydrogen atoms. It is denoted by ‘I” and it gives an idea about the shape of the orbitals and also gives the possibility of energy sub-levels or sub-shells associated with the main shell. This quantum number ‘l’ is a measure or finding the value of the orbital angular momentum of the electron in it’s orbital motion about the nucleus, hence it is also known as ‘orbital angular momentum quantum number’ or simply ‘orbital quantum number’. Mathematically, it is defined as:
$$ mvr=\frac{h}{2\pi }\sqrt{f\left(l+1\right)} $$
Where if is the azimuthal quantum number The possible values of ‘I’ depend upon the value of ‘ n ‘. lt’s values range from 0 to (n-1), i.e. d = 1,2,3, too (n-1)  each of which represents different energy sub-levels or sub-shells. Usually the values I = 0,1,2,3… are designated by the letters s, p, d, and f……  respectively. The first four letters originate in spectroscopic notation: s = sharp, p = principal, d =  diffuse, and f = fundamental which are characteristics of the spectra, and the remainder follow alphabetically.
Permitted values of ‘Y’ for a given value of ‘ n ‘; The total number of different values of I is equal to . In other words, the total number of sub-shells in a given shell is equal to the number of the main shell ‘ n ‘. For example:
(i). If n = 1; the I can have only one value equal to zero; i.e I=0. Similarity.
(ii). If n = 2; l = 0,1 (two values)
(iii). If n = 3; l = 0,1,2 (Three values)
(iv). If n = 4; l = 0,1,2,3 (Four Values) and so on.
It means, that K-shell consists: of only one s- sub-shell; L-shell consists: of s- and p- two sub-shells:
M-shell consists: of s- p- and d- three sub-shells and N-shell consists;  s- p-  d- and f- four sub-shells and so on. As shown below:

The maximum number of electrons that may be accommodated in a given sub-shell is equal to 2(2l + 1). Therefore s, p, d, and f- sub-shells may accommodate and 14 electrons respectively. In a particular energy level, the energies of these sub-shells are in the following order:
s < p < d < f….

This quantum number was introduced in 1896 by P. Zeeman to describe the splitting spectral lines under the influence of an applied magnetic field so-called ‘Zeeman effect‘. This magnetic quantum number is designated by the letter “m’ or “ml” and it gives an idea regarding the orientation of orbitals in space. This quantum number is related to the component of angular momentum stonge a chosen axis. For example to the z-axis.

Permitted values of ‘m’ for a given value of l:

In order to account for the multiplet structures in the spectra of certain atoms, Uhlenbeck and Goldsmith in 1925 suggested that the electron while moving around the nucleus in an orbit also rotates (or spins) about its own axis either in clockwise 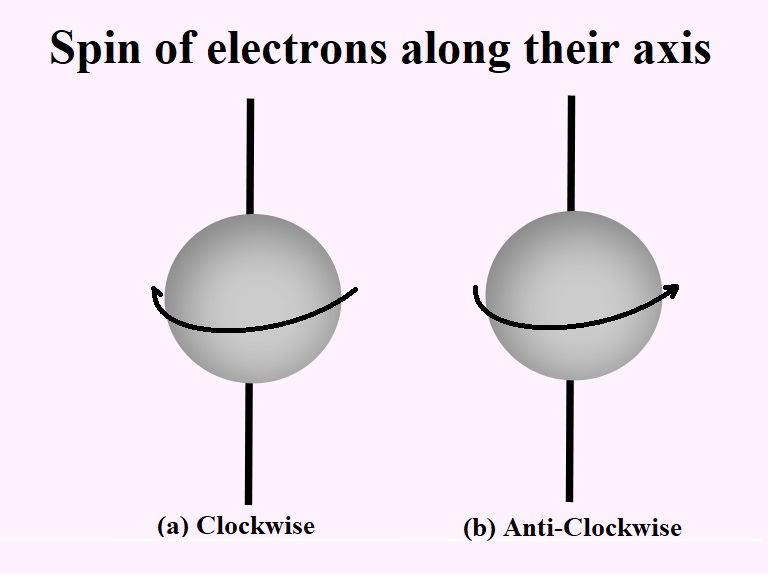