In the long form of the periodic table, elements are divided into four blocks known as s, p, d, and f-block of elements where s stands for sharp, p for principal,d for diffuse, andf for fundamental spectral lines. This classification is done based on the types of orbitals Into which the last electron of an element enters.

s-block consists of all those elements which reside in group IA and IIA that are H to Fr and Be to Ra. Since s orbital contains a maximum number of two electrons hence it has only two groups in the periodic table l.e. alkali metals of group IA and alkaline earth metals of group IIA having one and two electrons in their respective s-orbital. Thus, the electronic configuration of group | A, and IIA are represented as ns1 and ns2 respectively. Where n Stands for the number of the outermost shell. The penultimate orbit (n−1) of these groups is filled and that of the outermost orbit is incomplete.

(a) Alkali and alkaline earth metals have one and two electrons respectively in their outermost shell hence they are univalent and bivalent respectively.
(b) Alkali metals have the bigger or largest atomic radii in their corresponding period’s table followed by alkaline earth metals.
(c) The s-block elements have low ionization energy: Alkali metals, in their respective periods, have the lowest ionization energy followed by the alkaline earth metals. Low values of ionization energy are because the valency electrons of these atoms experience a greater screening effect due to the presence of closed shells of electrons.
(d) They are highly electropositive. Hence they form ionic compounds (except Be and Mg) and lons in solutions.
(e) These are soft and malleable.
(i) they are good conductors of electricity and heat nature.
(g) All the cations of IA and IIA group elements are diamagnetic and colorless due to the absence of unpaired electrons in orbitals.
(h) Due to their low. Ionization energy can easily lose its valency electrons, and hence they are good reducing agents.
(i) Their hydroxides are strong bases: This is due to the large difference in the electronegativities of alkali metals and oxygen as compared to between oxygen and hydrogen in M−0−1 leading to the formation of M+ and OH−ions. 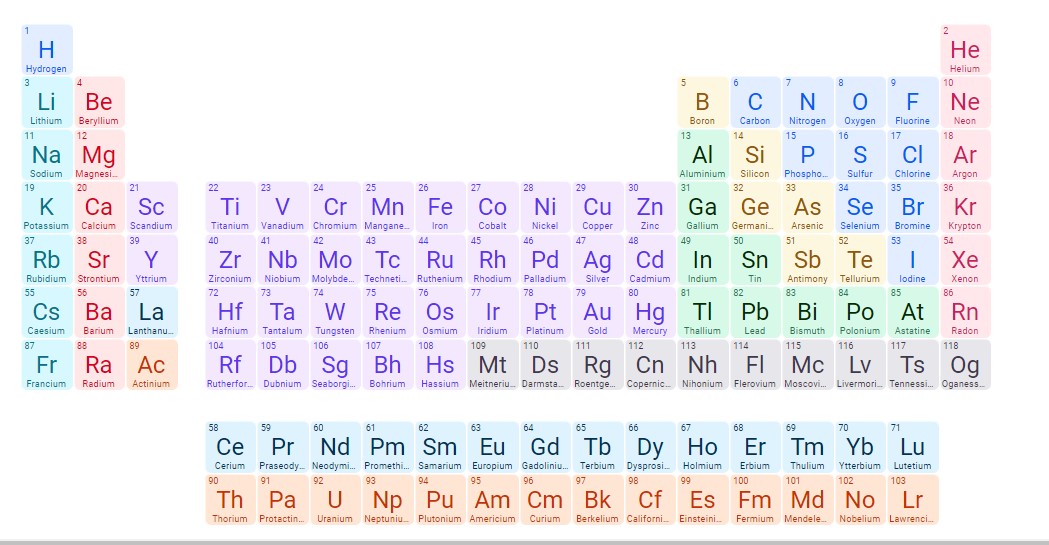 In P-block, the filling of electrons takes place in the P-orbitals in a progressive manner i.e. the electron enters one by one in the p-orbitals. These elements are called P-block elements e.g.

In general, the elements of this block have valence-shell electronic configuration ns2np1 to 6 where n is the number of outermost shells. All the elements have completely filled the penultimate (the inner one) shell and incomplete outermost shell. The physical and chemical properties of these elements completely depend upon the presence of p-electrons hence they are called p-block elements. All the elements having electronic configuration ns2np6 are inactive and known as ‘Inert gases’.
Characteristics of p-block elements :

(a) As we move across the periodic table from left to right (i.e. from group 3rdA to 7thA), there is a regular gradation from metallic to non-metallic character.
(b) They are bad conductors of heat and electricity (except those which are metals).
(c) Most of them are electronegative.
(d) They generally show variable valencies.
(e) The reducing character decreases and the oxidizing character increases when we move from group IIIA to group VII A. Thus, in the third period, Al is a good reducing agent, Si is a weak reducing agent, P and S are both reducing as well as oxidizing agents, and chlorine is 8 strong oxidizing agents.
(i) These elements form mostly covalent compounds although their ionic character increases from top to bottom in a group.

(g) They form colored as well as colorless compounds.
(h) Elements of the 4th, 5th, and 6th periods of this block contain empty d-orbitals. This enables these elements to form various complexes by forming coordinate bonds with donor molecules by utilizing the empty d-orbitals.

(i) The non-metallic oxides are acidic in nature behavior, e.g. NO2, P2O5, SO3, etc. This property increases with the increase of nonmetallic character.
s- and p-block elements are called normal or representative elements.

In this case, the last entering electron occupies a position in d-orbitals. In other words, there is the progressive filling of electrons in d-orbitals. Hence, they are called ‘ d-block elements. The electrons enter in the penultimate orbit ( n−1 shell) rather than the outermost orbit, thus, in the case of d-block elements both penultimate and outermost orbits remain incomplete. They have 10 elements in each of the 4th,5m,6th, and incomplete 7th  periods. The general configuration of these elements is ns2(n−1)d1 to 10.
Characteristics of d-block elements :

(b) They are metals that are malleable and ductile.
(c) They are good and excellent conductors of heat and electricity.
(d) They are electropositive but less than the s-block elements.
(e) Their ionization energies are larger than those of s-block elements but lesser than those of p–block elements.
(f) They form ionic as well as covalent compounds.
(g) They are ‘paramagnetic’.
(h) They form ‘colored compounds and colored complexes:
(i) They have a marked ability to form complexes. This is due to the fact that their atomic or ions have
(I) small size
(II) higher nuclear charge and
(III) a number of inner d-orbitals for coordination.
Thus, they occupy a position in the heart of the periodic table because the properties of these elements are mid-way between those of s and p-block elements. They are also known as “transitional elements” and are divided into three transition series.

In this case filling of the last electron takes place in 3 d orbitals. They lie in the 4th  period constituting 10 elements from Se to Zn with atomic numbers 21 to 30.

In the third transition series, the last electron is added in 5d – orbitals and they occupy a position in 6 the period of the periodic table. It includes 10 elements starting from57La and 72Hf to 80Hg. The elements having atomic numbers 58 atomic number to 71 atomic number are considered to be inner transition elements.

In the case of f-block elements, the last electron is added to f-orbitals. There is the progressive filling of f-orbitals, which is taking place from |1 to 14 electrons. In this case, the tilling of the electron takes place in the anti-penultimate orbit i.e. (n−2) shell. Thus, in the case of 1-block elements the outermost shell (n), penultimate shell (n−1), and anti-penultimate shell (n−2), all three remain incomplete in which nth orbit has only 2 electrons in the s-orbital (n−1) the shell has either zero or one electron in d-orbital and (n−2) the shell has 1 to 14 electrons in f-orbitals. Hence, the general electronic configuration of I-block elements is represented as (n-2) ft to i4 (n−1) d 0 or 1n2. They are named Tinner transition elements because they constitute the series within the transition series (d-block elements). Thus, f-block elements have incomplete 5d or 6d orbitals as well as incomplete 4f or 5 f orbitals respectively. Both f-block can be subdivided into 14 elements which are progressively filled by the addition of electrons in either 4f or 5 f orbitals and constituting 4f series and 5t series.

As it is previously defined the progressive addition of electrons in 4 f-orbital takes place and its first element is 58Ce and the last one is 71Lu constituting a set of 14 elements with electronic configuration:

The elements of this series are called lanthanides or lananones”.

Wain features of the long form of the periodic table :

1- The long form of the periodic table consists of 18 vertical divisions called groups:
2- All the elements having an incomplete outermost shell and complete inner shells are called ‘normal elements”.
3- s-block consists of two groups that are IA and ILA where s-orbitals are being filled up.
4- In the groups, IIIA to VltA including the zero groups are known as ‘p-block elements because the filing of electrons takes place in p-orbitals.
5- The elements of IIIB, IVB, VB, VIB, VIIB, VIII, IB, and IIB groups have outermost as well as inner shells incomplete and are known as ‘d-block elements.
6- The elements of the zero group is called ‘noble gases’ or ‘inert gases’ as they have complete Inner and outermost shell:
7- There are 7 horizontal rows which are called ‘periods:
(a) the First period has only two elements (H and He). It is called the ‘shortest period”.
(b) Second and third periods have only 8 elements each. They are called short periods.
(c) Fourth and fifth periods have 18 elements each. These are called ‘long periods’.
(d) the Sixth period has 32 elements having elements, (Cs to Rn ) and including 14 lanthanides.
(e) the Seventh period has only 19 elements along with 11 newly discovered elements.

Advantages of the how long form of the periodic table:

It has several advantages over Mendeleev’s periodic table and others.
(i) This arrangement is based on the basis of atomic number of elements.
(ii) The sequential filing of electrons in various energy levels on the basis of atomic numbers is quite easy and reproducible.
(iii) All the elements placed In a group have resemblances in their physical and chemical properties.
(iv) More metallic elements occupy a place left to the periodic table whereas less metallic or nonmetallic elements are placed on the right-hand side of the periodic table.

(v) This form of the table separates normal, transitional, and inner transitional elements from each other. Lanthanides and actinides occupy a place at the bottom of the periodic table for convenience in the study.
(vi) The reflection of similarities, differences, and variations of trends in chemical properties is more clear in this form of the periodic table.
(vii) In this periodic table the position and electronic configuration are totally correlated with each ofter.
(vii) The dissimilar elements have no place together in a group.

Disadvantages Defects or of long team form of the periodic table:

Although a large number of defects are removed in this table yot it has certain disadvantages.
1. The position ofH Is not certain. It may be placed with IA or VIIA group elements.
2. It does not explain the distribution of electrons in s,p,d, andf=orbital.
3. It has no capability to include lanthanides and actinides in the main body of the periodic table.
4. Lanthanum (La) and actinium (Ac) have resemblances with d-block as well as with f-block elements hence they are not placed in their right position:
5. ∣+ is unable to reflect an idea about the exact distribution of electrons among all the elements.
6. He (1s2) has a different electronic configuration than other inert gases (ns2np6) hence it should not be placed along with them. Similarly, it shows the same configuration as alkaline earth metals but He is inert. Hence, the overall position of He is not justified.