The vibrating string behaves like a wave. The motion of the electron is also like a sine wave. Let us consider a sine wave whose wavelength is ‘ λ ‘, ‘ A ‘ is the amplitude at any point along the “x” axis and “y” is its wave function, then

Differentiating the above equation with respect to the x, then

Now the second differential coefficient of the above equation is 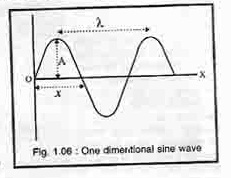 This is the equation when the electron will move only in one direction. Now when an electron moves in the three-dimensional space x, y, and z axes, then

Where x, y and z are three cartesian axes;

The total energy of a moving electron is the sum of kinetic and potential energies, hence

Putting the value of v2 in equation (iv) we got

The physically possible solution of the Schrodinger wave equation must have certain properties of the wave function.
1- ψ the mist is continuous and finite.
2- ψ must be single-valued.
3. The probability of finding the electron in overall space from +∞ and -∞ must be equal to one. Ψ2 is the probability of finding the electron at a point.
$$ \int _{-\infty }^{+\infty }\:y^2dxdydz=1 $$
There are several waves functions ψ1, ψ2, ψ3 which will satisfy these conditions to the wave equation. Each of these wave functions has corresponding energy E1, E2, E3 respectively. Thus.

etc is called “an orbital’.
For a particular atom, there are a number of solutions to the Schrodinger wave equation that are sure acceptable and each orbital is designated by ‘n’, ‘l’, and ‘m’ which are called principal, azimuthal, and magnetic quantum numbers respectively.
In the first group of solutions, the probability of finding the electron

depends on the radial distance ‘ r ‘ and is the same in all directions l.e.  (spherical orbit).
The second group of solutions depends upon ‘ ‘r‘ as well as on the direction in space along the x,y, and z axes.
ux=I(r)f(x)
uy=I(r)f(y)
ψz=I(r)f(z)
There are three p-orbitals in the degenerate state obtained for n = 2,4,5….. Whereas the third group of solutions to the wave equation show this group of orbitals has I =2  and is known as d-orbitals for each of the values of n = 3,4,5… Lastly, a set of solutions occur l = 3 and n = 4,5,6….  which are called f-orbitals.

In the case of hydrogen being hydrogen-like atoms such as (He+, Li2+, Be3+,..) which have only 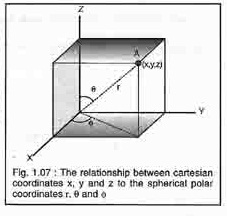 is a function that depends on the quantum numbers I and

is a function that depends on the quantum number m only.
R(r) is a function of the radial part of the wave function where as

are called the ‘angular parts of the wave function’, ‘ r ‘ is the radial distance of point

, the position of an electron from the nucleus.

The radial function F has no physical meaning but

is the probability of finding the electron in a small volume ‘ dV ‘ near the point at which R is measured. For a given value of ‘ r ‘, the value of

The probability of an electron at a distance

and is known as the radial distribution function. When ‘ r ‘ is plotted against

for hydrogen atom, we get the following curve- 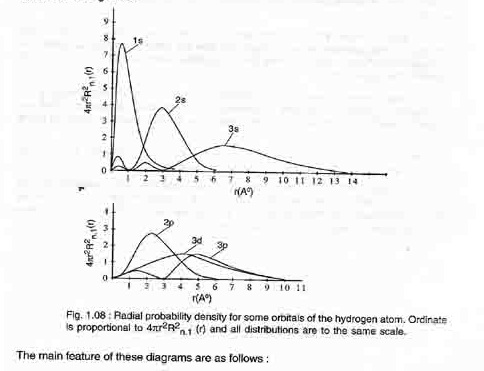 The redial probability density for some orbitals of the hydrogen atom. The ordinate is proportional to and all distributions are to the same scale.

depend only on the direction in the three-dimensional space and is independent of the distance from the nucleus. The probability of finding the electron at a distance ‘r’ from the nucleus and in a given direction

is the probability of finding the electron in a given direction,

at any distance ‘ r ‘ from the nucleus to infinity. The angular part of the wave function arises (due to drawing on polar coordinates) and gives the shape of orbitals. They show a positive or negative sign relating to the symmetry of the angular function. For bonding, the overlap of the orbital of a similar sign must take place.

1: It is easier to visualize the boundary surface of orbitals in the form of a solid shape having 90% of the electron density, For p – orbitals the electron density at the nucleus is zero. According to some texts, p-orbitals are two spheres that do not touch each other as shown in figure 1.09.

2: s–orbitals are spherically symmetrical and most of the electron density lie at the surface boundary of sphere. 2 s and 3 s also have a symmetrical sphere of increasing size. The drawing of 2p, 3p, 4p, 3d, 4d etc. also show the symmetry as shown in figure 1.09.

3: The probability of finding the electron towards

. The diagram is figure are the angular part of the wave function.

4: d-orbitals are five in number in which dxy, dyz, dzx, and

orbitals have the same shape but differ in their orientation. dxy, dyz, dzx lobes lie towards, yz and zx planes respectively,

lobes lying along and axes and lobes lie along the axis but the electron density also lies in the plane. 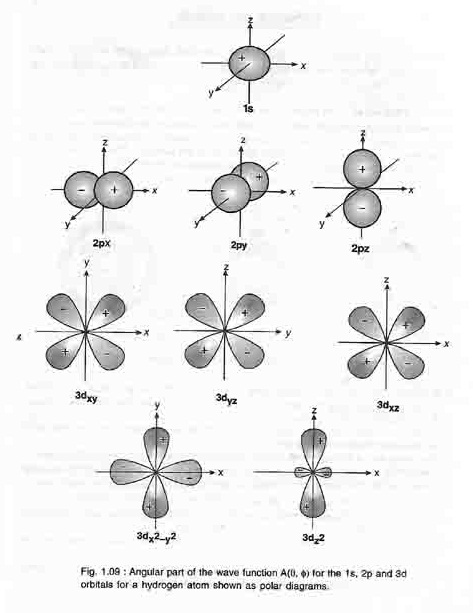